Born in Philadelphia, George Harding attended the Pennsylvania Academy of the Fine Arts at night from 1899 to 1900, while he worked with the architectural firm of Frederick Mann during the day. Following the advice of his sister Charlotte, who had studied with Howard PyIe at Drexel, he went to Wilmington to study for a […]

Wyeth spent the summer of 1903  at the Chadds Ford summer school. After a trip to Colorado and New Mexico in the fall of 1904, he painted a number of Western  subjects for the Post, Scribner’s and Harper’s Monthly.  After spending the summer of 1907 at Chadds Ford, Wyeth and his  young wife, Carolyn, decided […]

Eugenie Wireman was the illustrator of “Miss Philura’s Wedding Gown”, by Florence Kingsley, published about 1912.  She studied with Howard Pyle at Drexel in 1899.

Margaret F. Winner was born in Philadelphia, Pennsylvania, on October 21, 1866.  She was a student atthe Pennsylvania Academy of Fine Arts and Studied with Howard Pyle at Drexel Institute in 1897.  Later in her career, she became a portrait painter and miniaturist.

Wilson be an his professional work in New York as a commercial illustrator. PuI Ush ers and editors quickly saw the quality of his advertisements and magazine fiction illustrations, and he received many awards. In 1921, Wilson designed a woodcut of a sailor, entitled Home for Christmas, which he sent as a personal Christmas card.  […]

Williamson exhibited for many years at the Penns lvania Academy of the Fine Arts and at the Ogunquit Art Association. In ad J ition, she exhibited at the Panama-Pacific Exposition in San Francisco in 1915 and at the Sesquicentennial International Exposition in Philadelphia in 1926. She illustrated for St. Nicholas, House and Garden, Youth’s Companion, […] 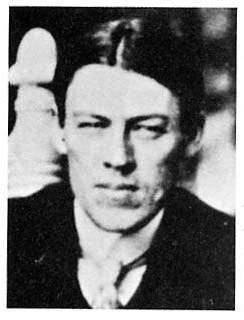 Walter Whitehead was born in Chicago, Illinois, in 1874. He studied at the Art Institute of Chicago before joining the Howard Pyle School of Art about 1901. While at Pyle’s school, Whitehead helped Pyle by managing the art supplies which Pyle sold to his pupils at cost. His duties included not only stocking and dispensing […]

Griswold Tyng was born in Dorchester, Massachusetts, in 1883 and graduated from the Massachusetts School of Art. He studied with Joseph Decamp and attended Howard Pyle’s Monday night criticism classes. Tyng was an official United States Army artist during World Wars I and II. From 1947 to 1960, he was a consultant and illustrator for […]

True’s favorite subjects for illustrations were Indians, cowboys, cavalry, and scenes typical of frontier life. Not only an illustrator but also a mural painter, exam les of his murals can be found in Denver, Colorado. True had a one-man exhibition circulated in twenty-nine cities by the American Federation of the Arts; seventy-two sketches for his […]

In 1917, Townsend, with seven other artists, was commissioned a captain with the American Expeditionary Force and assigned to record the war. His paintings and drawings are now in the collection of the Smithsonian Institution in Washington, D.C. Other examples of his paintings and rints are owned by the Metropolitan Museum of Art, the New […]