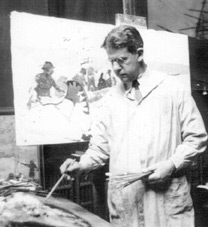 Frank Earle Schoonover was born on August 19, 1877, in Oxford, New  Jersey. In 1891, he graduated with high honors from a Trenton, New Jersey, high school, where he gave the salutatory address.  After considering the idea of entering the ministry, he decided,  in 1896, to attend art school at the Drexel Institute in Philadelphia.  […]

Walter Russell was born in Boston, Massachusetts, on May 19,1871. He studied at the School of the Boston Museum of Fine Arts with Albert Munsell and Ernest Major. Accounts vary concerning where Russell studied with Howard Pyle; some state Drexel and others Wilmington. He is listed as a day student in the School of Illustration […]

Rush moved to New York City around 1900 to attend the Art Students League. There, she studied with John Henry Twachtman. She remained in New York until 1904, when she moved to Wilmington to study with Howard Pyle. She, along with Ethel Pennewill Brown Leach, was one of Pyle’s favorite students. Not only did she […]

Theodore L. Rosin was a native of Wilmington, DE. He apparently never did any illustrative work but was strictly a landscape painter. He frequenty posed for the other Fyle students. Rosin was employed by the Post office in Wilmington at the time of his death on January 29,1926.

Rogers summarized the nature of the Pyle school in a letter of February 14, 1947: There was no school in the usual sense of the word. Aside from the few men privileged to work in studios adjoining Mr. Pyle’s, each of us had our own studios in town. We were professional artists working for publication.. […]

In 1912 he went to Paris and on his return established a studio first in Wilkes-Barre, and then in New York. According to Gayle Hoskins’s notes, he became interested in music in his later years, although neither the extent nor the nature of his involvement is indicated in the notes.

Her work, like that of these others (Elizabeth Shippen Green, Charlotte Harding, Sarah Stilwell Weber, Wuanita Smith, and Ida Dougherty, for example) was characterized b a decorative quality. She did illustrations, including covers, for Country Gentleman, Scribner’s, Ladies’ Home Journal, Saturday Evening Post, and Collier’s. She was married to Henry F. Wireman. In a letter […]

Richards noted, in a letter to Gertrude Brinckle in the Delaware Art Museum files, that 1905 was the year she came to Wilrnington. She studied with Howard Pyle, and remained in the city for seven years. In a 1927 interview, she recalled Pyle’s attitude toward his teaching: “Twice a week we would come together and […]

Studied with Pyle at Drexel and settled in California.

He was a prolific writer and illustrator of children’s books; one of his best known works was The New Adventures ofAUce, a continuation of the original Lewis Carroll story. The adult books Rae illustrated include Flight into Oblivion, by Alfred J. Hanna, and The Winds of God, by Irving Bacheller.  Rae illustrated books published by […]