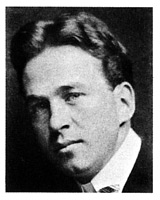 William James Aylward was born in Milwaukee, Wisconsin, on September 5,1875. His father was a shi builder and lake captain, and as a boy Aylward spent many hours in the shipyards and acquired a lifelong love of the sea. His first jobs were for engraving houses in Milwaukee and Chicago, work which he described to Richard Lykes (in a letter in 1946) as “ten years of drudge at commercial work.” At the age of twenty-six decided that he would like to learn to paint, and wrote to Howard Pyle, asking if he could study under him. Pyle suggested that he first submit some of his work. Too impatient to do that, Aylward came East to Wilmington with Arthur Becher, was accepted as a student, and shared the middle studio on Franklin Street with Becher, Clifford Ashley, Gordon McCouch, Henry J, Peck, and Ernest J. Cross. In Wilmington he met and married Ida Dougherty, a Pyle student who specialized in portraits.

In 1905, when the floating dry dock Dewey was to be towed from Sparrow’s Point, Maryland, to the Philippines, Pyle persuaded Theodore Roosevelt to allow Aylward to go in a supply ship with the flotilla convoying the Dewey. Aylward made twenty illustrations for Scribner’s of this trip. He then sailed on a four-masted bark from Japan to San Francisco, completing an almost year-long journey.

Aylward was always fascinated by ships and seafaring life and specialized in this in his illustrations. He illustrated sea stories by Joseph Conrad and Jack London and Twenty Thousand Leagues Under the Sea by Jules Verne. He did a series of illustrations on the perils of the sea for Collier’s, and wrote and illustrated accounts of water-life around Singapore and Hong Kong and a story “Steamboating through Dixie” for Harper’s Monthly. His illustrations for advertisements also included, for example, one for the Reo automobile “Flying Cloud and another for the Gray bar Electric Fan, “Two ways to keep cool.” For Scribner’s he wrote and illustrated an account of English naval life in the eighteenth century.

In January 1918 Aylward was one of eight men commissioned as official war artists in the Engineer Reserve Corps. His drawing, Troops waiting to advance at Hatton-chatel, Meuse 5. Mihiel Drive, was exhibited in several American cities after the war and was reproduced in Art and the Great War by Albert Gallatin, published in 1919. He was a member of the American Water Color Society, the Salmagundi Club, and the American Artists Professional League. His work is in the collections of the National Collection of Fine Arts, the Library of Congress,
the Delaware Art Museum, and the Peabody Museum of Art. He was author of a book, Ships, and How to Draw Them, and taught at the Pratt Industrial Art School, 1930-1934, and the Newark (New Jersey) School of Fine and Industrial Art, 1936-1955.