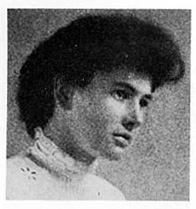 Ethel Franklin Betts, sister of Anna Whelan Betts, spent most of her life in the Philadelphia area. After studying at the Pennsylvania Academy of the Fine Arts, she studied with Howard Pyle at Drexel School of Illustration in 1899. She moved to Wilmington with other Pyle pupils in 1900, when their teacher set up studio, and classes in Delaware. There she shared a studio with her sister, Anna, and Dorothy Warren. She remained in Wilmington for two winters, the second of which she lived in the Pyle household. After leaving Pyle’s studio, she worked in a  studio in her parent’s barn until her marriage in 1909. After her marriage, she did little work, mainly illustration, for school texts and portraits.

During fhe first decade of this century, Betts illustrated several Collections of  poems by James Whitcomb Riley, including While the Heart Beats Young in 1904 and The Raggedy Man in 1907. Additionally, she illustrated Favorite Nursery Rhymes in 1906 and The Complete Mother Goose in 1909. At the same time, she was illustrating stories in St. Nicholas, Collier’s, and Reader.

Ethel Betts was awarded a Bronze Medal in 1915 at the Panama Pacific lllustration Exposition, for her illustration for “The Six Swans” from Fairy Tales from Grimm. She was also a member of the Philadelphia Water Color Club and The Fellowship of the Pennsylvania Academy of the Fine Arts, where she continued to exhibit into the 1920’s.

Ethel Betts career covered both magazine and children’s book illustration. Her earliest work  shows the influence of the Pre-Raphaelites, but as she grew older she evolved her own decorative style. Like her sister Anna, and her fellow students, Elizbeth Shippen Green and Emlen McConnell, Ethel Betts relied on juxtaposed areas of color, and pattern within a strong narrative composition to illustrate the stories. It was in her illustration of children that her formula was most successful.