Upon returning to the United States in 1910, Thrasher came to Wilmington to study with Pyle and for a time shared a studio at 1305 Franklin Street with Eads Collins and Douglas Duer. When World War I interrupted his work, he served with the Fortieth Engineers, doing camouflage work in France along with Duer, with […]

In a biographical sketch for the Saturday Evening Post, she made her respect for Howard Pyle’s teaching clear: He was an inspiring teacher The sincerity of his own work and his unflagging enthusiasm affected everyone around him and made a deep and lasting impression on his students. I remember walking over to the station after […]

Herbert D. Stitt was born in 1880 in Hot Springs, Arkansas, and attended West Point before going to Paris to study art. It is not known long he was in Wilmington or exactly when, but he seems to have attended Howard Pyle’s compsition lectures and criticisms. Judging from a letter Stitt wrote Gertrude Brinckle in […] 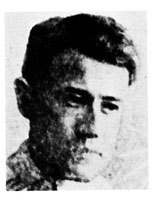 C. Clyde Squires was born in Salt Lake City Utah, on August 29,1883, and began working as a newspaper artist in Salt Lake when he was a teenager. In 1901 he went to New York, where he attended the New York School of Art and studied with Robert Henri and Kenneth Hayes Miller for a […]

Wuanita Smith described Pyle’s way of encouraging his students: It was his constant inspiration that made me improve rapidly in his class. Such as “Keep a stiff upper Lip,””It is easy to paint,””Just like 1,2,3,4.” And strange to say I began to Find it so by “seeing things clearly in my mind” and just putting […]

She also studied with William M. Chase, at the Art Institute of Chicago, and at Wheaton College, Illinois, where she later became head of the Art Department after holding the same post at Gulf Park Academy in Gulfport, Mississippi. Like many of the women artists under Pyle’s tutelage, Smith’s illustrations focused on children. She also […]

As an illustrator, Smith’s work appeared in the Ladies’ Home Journal as well as Scribner’s and Harper’s Monthly. He seemed to specialize in rural subjects.  His book illustrations include The Beginning of the American People, by Mary G. Kelly, and The Children’s Longfellow. He also taught at the Rhode Island School of Design.

In the spring of 1910 he moved to Wilmington to attend Pyle’s lectures and shared studios with Foster at 1108 and 1305 N. Franklin Street. He later worked as a cartographer for the U.S. Navy and was in charge of technical illustration at the McLaughlin Research Corporation in Washington. Skidmore worked in two distinct styles; […]

Sometime during 1908, the Kers returned to New York and were divorced. In 1910, Mary Sigsbee attended Howard Pyle’s lectures. One of her fellow students was Anton Otto Fischer, the German-born marine illustrator and painter. They were married in 1912. During their married life, the Fischers divided their time between New York City and Bushnellsville, […]

While he was in Wilmington, Shrader played the cello in the Wilmington Symphony Orchestra. Later in his life, he abandoned illustration, became a landscape ainter, and was appointed Dean of the Los Angeles County Art Institute, from which he retired in 1948. As an illustrator Shrader specialized in Western subjects. In addition to his magazine […]