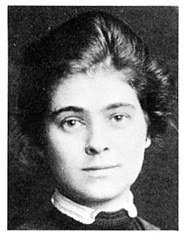 Bertha Corson Day was born in Philadelphia and grew up in Germantown. Her cousin was married to the popular artist Thomas Hovenden, and Bertha Day posed for his painting Bringing Home the Bride. She enrolled in the Drexel Institute art department in 1892; her teachers included sculptor Charles Grafly and watercolorist Lydia Austin. She became a friend of Lydia Austin and her husband Maxfield Parrish.

Bertha Day studied in Howard Pyle’s illustration class that began at Drexel in the fall of 1894. After completing the four-year course at Drexel in 1896, she decided to continue as an advanced student in Pyle’s illustration class from 1897 through 1899. Having made plans to go to Europe for the summer of 1898, she was unable to attend Pyle’s first summer school at Chadds Ford. However, she did attend the next year along with her friends Anna Whelan Betts, Ellen Bernard Thompson, and seven other Drexel students.

Three of her decorative designs were published in the “little magazine” Chap-Book in 1896 and 1897, and her poster design advertising Cashmere Bouquet products won second prize in a contest sponsored by Colgate and Company in 1897. In 1899 she was commissioned to design a billboard announcing the National Export Exposition in Philadelphia. Her historical illustrations appeared in several novels, including Bulwer Lytton’s Last Days of Pompeii in 1898 and Paul Leicester Ford’s Janice Meredith in 1899. Her most important work was a series of twenty-two illustrations for the book Where the Wind Blows, a collection of fairy tales from different countries, written by Howard Pyle’s younger sister, Katharine, and published in 1902.

After her marriage in 1902 to Daniel Moore Bates of the Bancroft textile firm, she did very little commercial illustration. When they moved to Wilmington, she turned instead to designing bookplates and program covers for the Greenroom Club, a local theatrical group.

In 1912 the Bates family moved to Lewiston, Maine, and maintained a summer home on MacMahon Island. From 1920 to 1929 they lived in the Philadelphia area. During those years Bertha Day Bates occasionally painted landscapes, but most of her time was devoted to raising her three children. In 1919, when they moved back to Wilmington, she became active in social and cultural activities and was a member of many organizations, including the Wilmington Society of the Fine Arts (now called the Delaware Art Museum), the Historical Society of Delaware, the Women’s Committee of the Philadelphia Orchestra, and the Cosmopolitan Club in Philadelphia. She died at her home “Selborne” in 1968 and age of ninety-three.