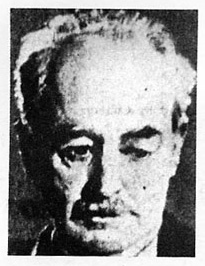 Edward B. Edwards was a master of various media, but he specialized in the grahic arts. When he died at the age of seventy-five, he was most remembered for the calligraphic magazine covers that he had designed in Celtic, Byzantine, Gothic, Renaissance, and Egyptian styles. How much of his command of ancient and modern motifs Edwards owed to Howard Pyle’s teaching is uncertain. He attended Pyle’s Monday night lectures in 1904.

Edwards was born in Columbia, Pennsylvania, in 1873 and spent most of his working life at his home on West Twelfth Street in New York. He studied for four years in Paris, for a year in Munich, and for a time in Rome. In his early years in New York, he studied at the Art Students League and served a four-year apprenticeship at the architecture firm of McKim, Mead and White. In 1892, he was listes as a member of the New York Architectural League.

Edwards designs and illustration, for books, magazines, and advertisement, reflect his expertise in many aspects of graphic arts. In 1899, he designed the decorations for The Life of Count Hoym for the Grolier Club.  Four years later, he illustrated A Book of Shakespear’s Songs. At the request of John D. Rockefeller, he decorated a privately printed book, The Altoviti Aphrodite. The art dealers Kouchakji Freres and Farim Kouchakji comissioned Edwards, to design Dr. Gustavus Augustus Eisen’s monographs, The Great Chalice of Antioch in Antiquity. Edwards also worked for G. Schirmer, Inc., the music publishers.

In 1943, Edwards received the American Artists Professional League gold medal of honor for his book Dynamarhycarhythmic Design: A Book of Structural Pattern (New York: The Century Press, 1932), an explanation of the uses of Elan geometry for the training of artists-designers. One writer described the book as “contemporary application of the classic Hellenic approach to art.” From 1910 to 1913, Edwards did covers for Outlook magazine. He also designed covers for Harper’s and other publications. Edwards was a founder and director of the American Institute of Graphic Arts. He taught dynamic symmetry and design at the Master Institute of the Roerich Museum.