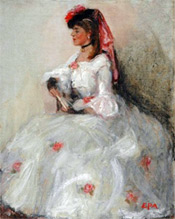 Elenore Plaisted was born in  Lincoln, Maine. She married C. Yarnell Abbott and lived for a time in Rose Valley, Moylan, Pennsylvania. She studied at the Pennsylvania Academy of the Fine Arts, the Philadelphia School  of Design for Women, and in Paris before entering the Drexel  Institute, where she studied with Howard Pyle in 1899.

Abbott exhibited her work at the Académie  des Beaux Arts in Paris and the Pennsylvania Academy of the Fine  Arts. She was a member of the Philadelphia Water Color Club,  and the Plastic Club of Philadelphia.

I'd like to mention only the  work I was glad to have done... under Mr. Pyle I did drawings,  paintings for illustration for poems for Saturday Evening  Post, Harper's Magazine and Scribner's and one of the illustrations for a book of Houghton Mifflin that  was given to the clan to illustrate. Mine was "The Minister  in the Black Veil." I did a book for Lippincott and George  W. Jacobs. All very youthful works and not at all good. My later  work has been illustrating Keat's poems, which have found no  publisher as yet, though they are my best work, and doing color  illustrations for Scribner's Magazine. The best of which  is "The Mother" and was published in the Christmas  number, 1916, I think. Scribner's is bringing out a book  of my pictures for Grimms Fairy Tales this Christmas in the same  set that Wyeth and Parrish have made famous. I had an illustration  for a story of Maxwell Struthers Burt in the last Christmas Scribner's  in black and white, an illustration for a story called "Kerfol"  by Edith Wharton and one by Ellen Glasgow called "The Shadowy  Third" the year before the war - 1916 - all in Scribner's.
In the 1919 March supplement  of International Studio, Eva Nagel Wolf, in an article  on Abbott, remarked on her fairy tales;

At last she has a theme she can  simplify or embroider to her heart's content. Elenore Abbott  loves her fairy tales as one who never grew up, and no child  who receives such a book will be disappointed... Elenore Abbott  is not a surface clever Artist; her active, vigorous yet idealist's  mind is brought into subjection and guides the long sensitive  fingers that hold the water color brush.
References: Bénézit;  Fielding; Young; Art Annual 26, 1919; International  Studio 67, 1919; DAM files.