At the dawn of the twentieth century, Wilmington was the epicenter of American Illustration. Many of the country’s aspiring young artist’s had migrated here to study under noted artist and illustrator, Howard Pyle. A native Wilmingtonian, Pyle established an illustration curriculum at Philadelphia’s Drexel Institute in 1894. After eight successful years there, he left to continue his tutelage at his Wilmington ateliers, which he built on Franklin Street in 1883, and expanded for his entourage in 1900. 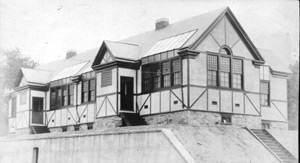 However, even these studios and the few other boarding rooms able to accommodate painters proved inadequate for the increasing number of both students and artists eager for Pyle’s advice and criticism. Fortunately, two of his favorite protégés, Stanley Arthurs and Frank Schoonover, were able to enlist the support of philanthropist Samuel Bancroft, Jr., C.E.O. of Bancroft Mills. He agreed to construct a spacious, four studio building at the corner of Rodney and Shallcross Streets. Local architect, Captain E. L. Rice, designed the building in a ” Queen Ann ” style often referred to as Shavian Manorial. An inscription on the wall of Schoonover’s studio still reads,

The other occupants were; N.C Wyeth, Henry Peck, Clifford Ashley, Stanley Arthurs, with Harvey Dunn soon to follow. Rent was $ 17.50 per month. As for selecting who would use which studio, Schoonover relates a story about drawing straws. Even though he drew the shortest one, Wyeth insisted he take the most desirable studio as a perk for getting the studios built.

Over the ensuing years, many illustrators and artists, both amateur and professional, rented various units, generally for a tenancy of a few years. Gayle Hoskins, Katherine Pyle ( Pyle’s sister ), W. H. D. Koerner, Stafford Good, and Ellen Bayard Kennelly were among them. Only Schoonover, who would eventually own the property, spent his entire artistic career in the same studio, where he painted over two thousand illustrations. Wyeth left in 1908 to pursue his remarkable career in Chadds Ford, Pennsylvania.

To quote Wyeth; ” I am finding deeper pleasure, deeper meaning in the simple things in the country life here ” Three years later he created the immensely popular Treasure Island paintings. Arthurs moved back to Pyle’s studio for the duration of his life, creating marvelous historical illustrations. Dunn moved to Tenafly , N.J. where he carried on Pyle’s philosophies, inspiring several young artist to become very successful illustrators. The studios also served as a venue for groups like the Sketch Club, Studios Group, and Camera Club, as well as occasional special exhibitions.   Several teachers held classes throughout the years, the last being Charles Vinson in the late sixties. Schoonover’s classes for both children and adults in the late forties and fifties were very popular. Some of those students became noted artists. 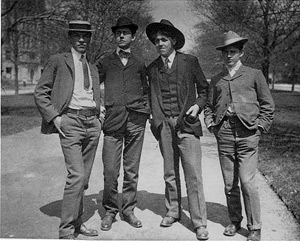 Photo of Harvey Dunn, Clifford Ashley, N.C. Wyeth, and Henry Peck. Circa 1908
Though threatened with demolition in the early nineteen seventies after Schoonover’s death, the studios survived thanks to the interest and support of the entire Delaware Avenue neighborhood. The new owners included Schoonover’s grandson, John. In 1979, the building was listed in the national register of Historic Places. During the nineteen eighties State and Federal Grants underwrote the complete renovation of the studios, including a new slate roof and twelve large skylights. The current members of the Schoonover Studios Owners Association are; William Deering, photographer in studio #4; Norman Tomases, artist in studio # 3; Kathleen Manger-Rios, artist in  # 2, John R. Schoonover, curator of Frank Schoonover’s original studio, #1.

Written and Edited by John Schoonover and Karol Schmiegel